Hello ladies! (And gents if there be any <.<) I've been mia but I have a good reason I swear! My husband and I were taking Scuba diving lessons and we are now Open Water certified, which is super fun and exciting! We live in one of the best diving spots in the world so I'm really happy we are getting out there to take advantage of it :) Unfortunately, spending a lot of time in the salt water like that is hell on my nails. I did a super cute mani last weekend but didn't have time to photograph it that day, then we went diving the next day and it was shot. Tip wear and chips all over the place, very sad really.
Aaaanyways, enough about that! I've entered in another franken contest (I do love those!) and now it's voting time. Am I trolling for your votes? Why yes I am! However, there's some super awesome frankens in there so I'd understand if you voted for someone else (I did :P). The contest is being hosted by Laura over at Laura's Lacquers, and she made it a theme contest called As Seen In Theaters. You can check it all out here. I loooooved the theme for this one and I really enjoyed making my franken. I will admit though, I had another movie in mind partially that I'd considered making one for but I couldn't decide what color to make for ROUS's hehe.
And now onto the franken! This little beauty is called Amalthea. I was a huge The Last Unicorn lover in my childhood and as I said in my blurb on her post, this movie popped into my head complete with a franken idea so I had to go with it. I'm really glad I did as I love how this turned out! So, without further ado, here she is! 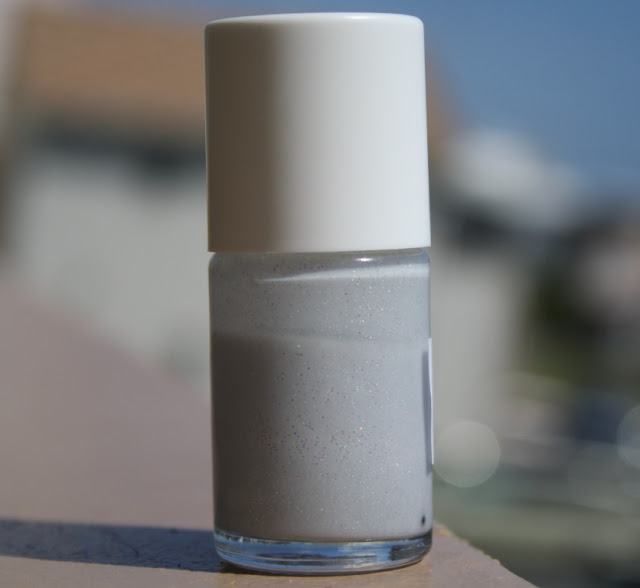 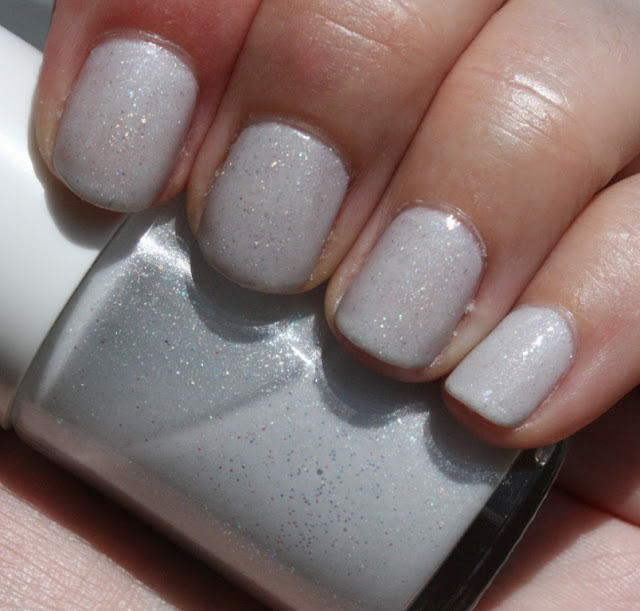 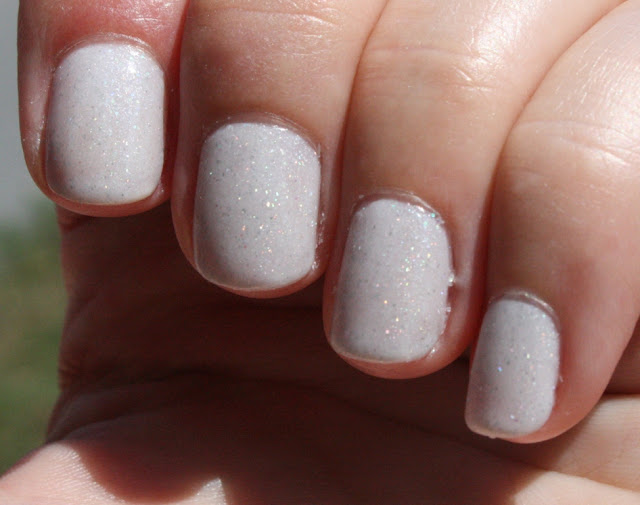 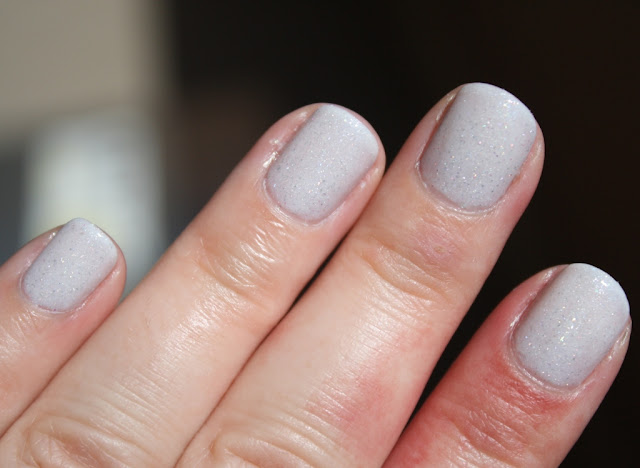 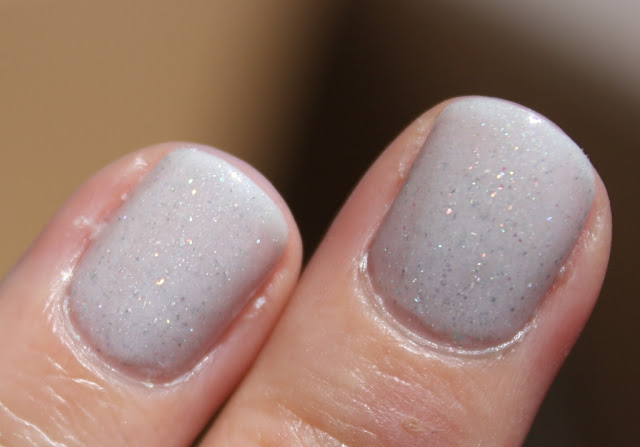 I hope you like Amalthea! I could do a whole set for The Last Unicorn now, I mean the Red Bull is pretty obvious but I also have an idea for Schmendrick which I'd have to name Magic, Magic, Do As You Will. I have to work on these :)
Again, go check out Laura's post and vote for your favorite here and seriously consider following her if you don't, she's got a great blog!
Thanks for stopping by,
Meeka :)
﻿
Posted by Meeka at 12:09 AM 13 comments

So, I told you guys that I had a good one for my 51st post and now I get to show you :) I'm sure everyone knows all about OPI and My Private Jet, I own two versions of it myself. Happily, I love both my versions even though my slightly scattered holo brown one usually gets looked down on online.
The one I have to show you today is the real deal holo version. I had actually bought my other one first at a Chatters salon in my old hometown, wore it and loved it. Maybe one to two weeks later I stopped in that same Chatters on my way home from work and was browsing. I think I had just read all about the different versions of MPJ and so took another look at what they had. Sitting right in the front of the row was one lonely rainbow bottle, so of course I snapped it up. I sifted through the rest of their bottles but all of them were the same as the first one I had bought. I have no idea how this one ended up in there but I'm quite happy for it!
Anyways, this version of MPJ is a brown based charcoal color with strong linear holo. I used two coats when I wore it as I like it brown moreso than black. I didn't use any base either for the same reason. It actually covered very well in two coats and wore like iron. I love when a beautiful polish does that :) I did put a third coat on after a few days as a touchup to take some pictures. Most of what I'm posting is only two coats but I do have a couple pictures of it at three for comparison.
Enough talking, on with the polish, right? :P 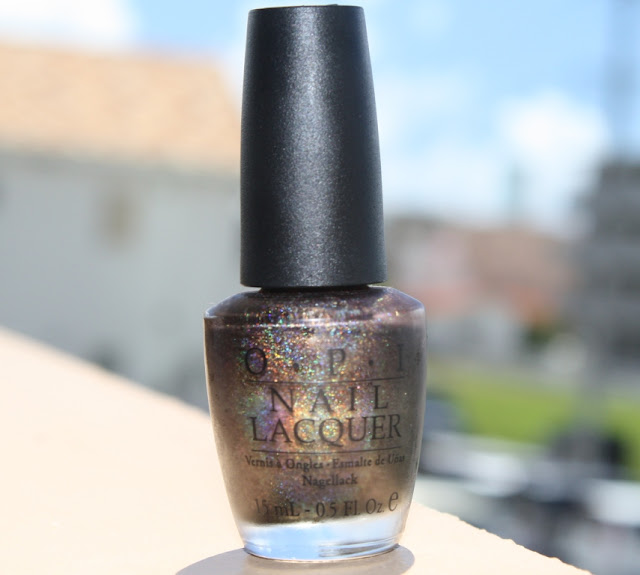 I don't know if that's the bottle or my camera fogging up but this is the only picture I managed to get where the rainbow showed up. 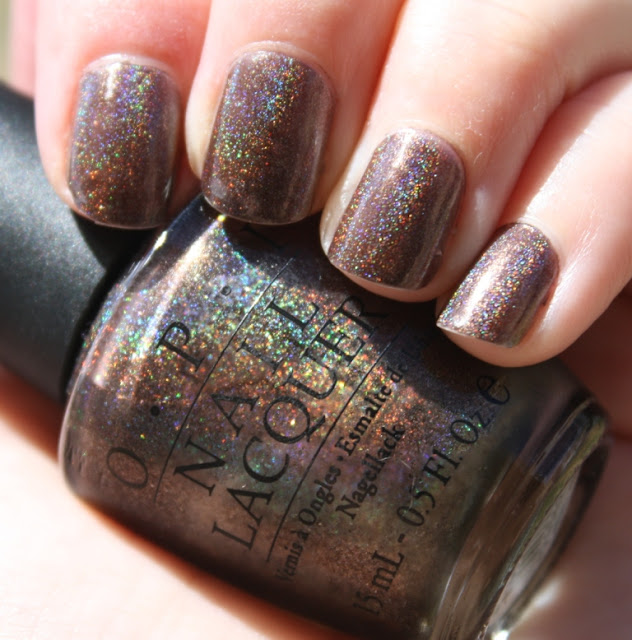 Two coats, this is the brown base I'm talking about. I'm sure many people won't like it but I love it! 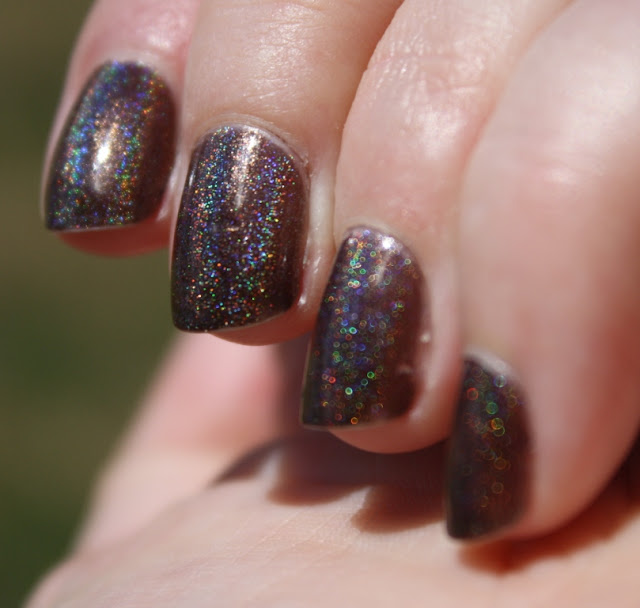 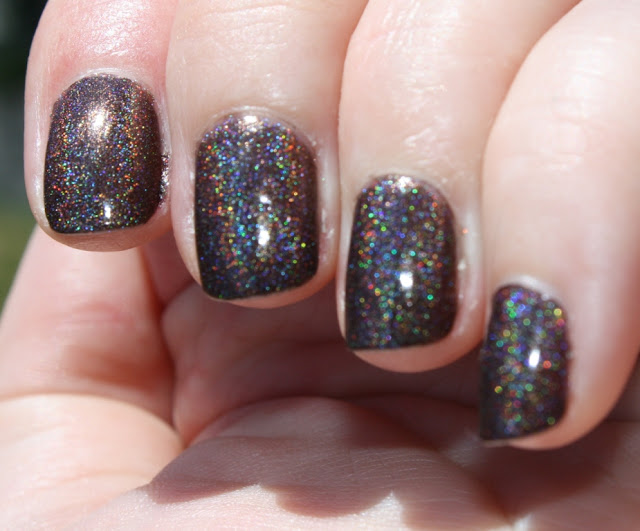 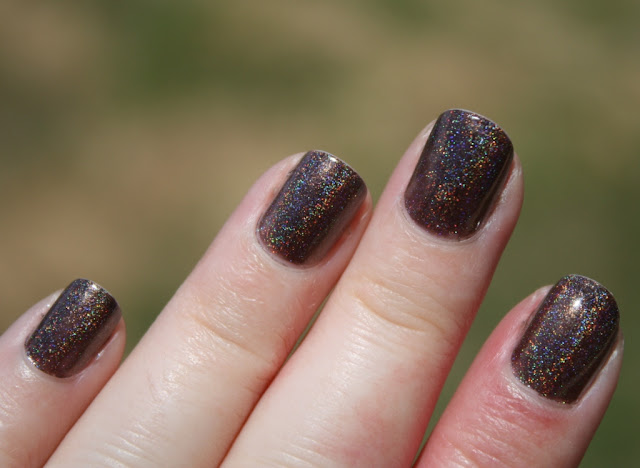 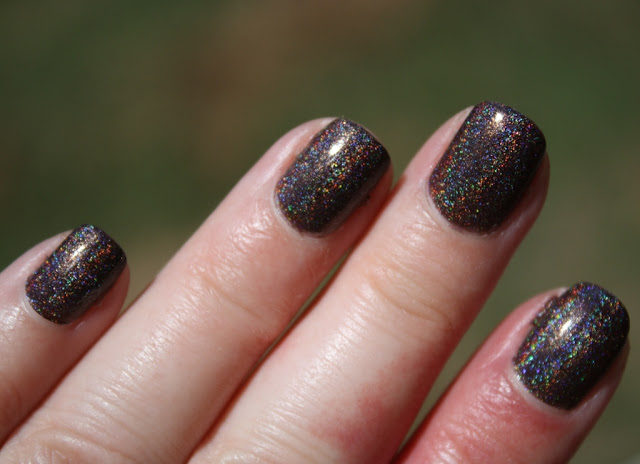 And three again. It's almost hard to tell the difference between these last two pictures.
So tell me, do any of you have MPJ? If so which version do you have and do you like it? I think they're all quite interesting and beautiful in their own ways. If OPI hadn't messed up and named them all the same thing I think they'd all have their own followings. But of course now it seems most people covet the holo because it's very hard to find. I got quite lucky with mine. If I had to pick a favorite between the two though... I don't think I could :P
Thanks for stopping by!
Meeka :)
﻿
Posted by Meeka at 11:17 AM 7 comments

Hello! This is my 50th post and I feel a bit like I should have worn something a bit more special for it but I didn't actually realize it until just now lol. That's ok, I have a really good one for my next post :) I also feel like I should have done this one a couple weeks ago when the typhoon hit, the name would have been really apt for that haha!
Dark & Stormy is an Icing polish I picked up sometime last year, this is my first time wearing it though. I do love blue polishes but for some reason I don't think they look right on me. They give me corpse hands so I rarely wear them. This is a gorgeous deep blue/green (green/blue?) that makes me think of the ocean. It almost has duochrome tendencies though I wouldn't actually call it one. Application was great, I used three coats as is usual for me.
I think part of the reason I hadn't worn this till now was because I found China Glaze Rodeo Fanatic shortly after I bought this and they are quite similar. They aren't dead on dupes though, at least in the bottle (I haven't done a comparison swatch). Dark & Stormy has a much heavier green flash than Rodeo Fanatic though I think it would be a decent substitute if you can't find the China Glaze. 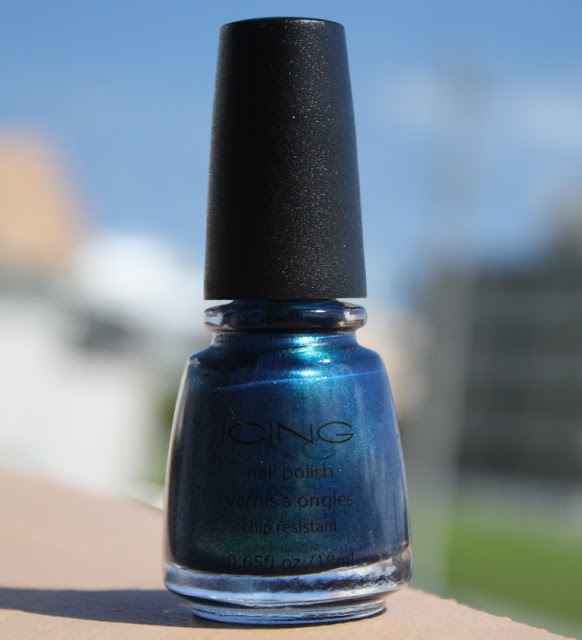 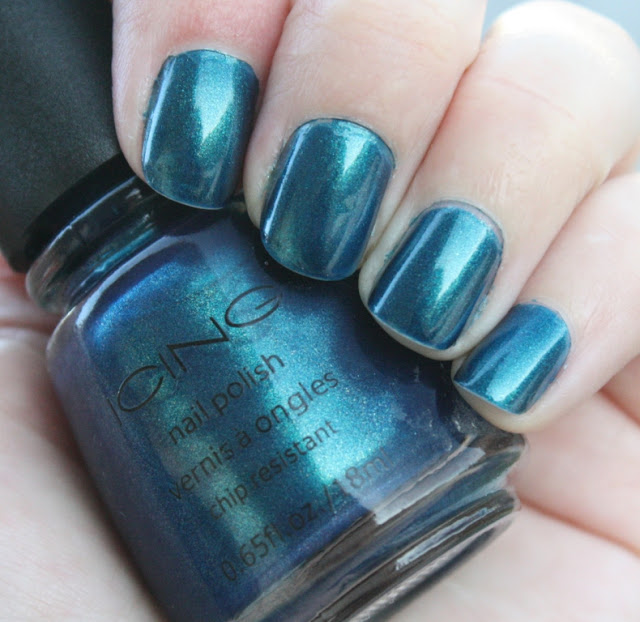 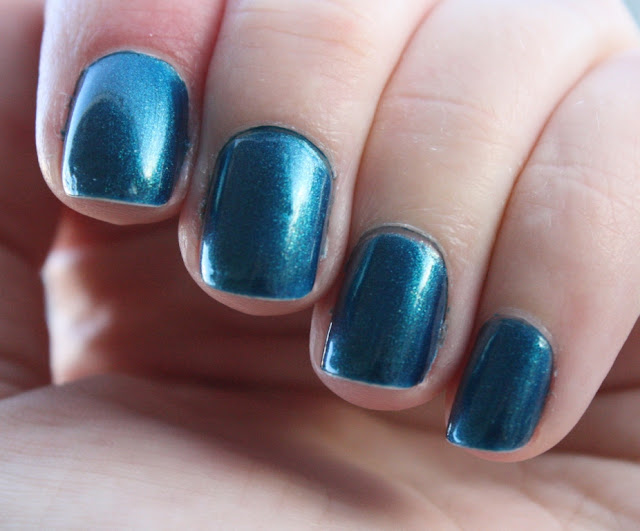 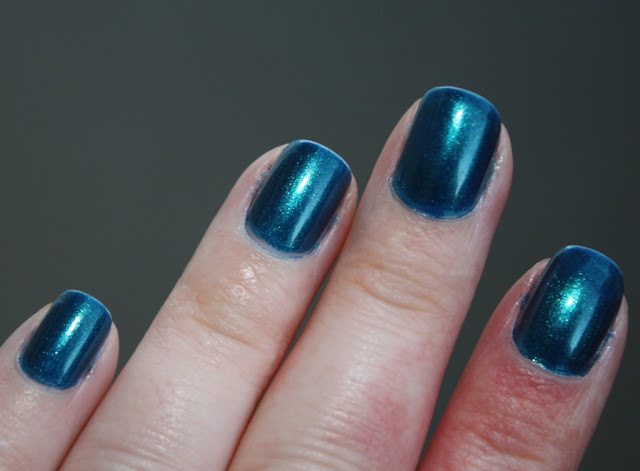 I may actually come back to this and post a comparison of Dark & Stormy vs Rodeo Fanatic, partially to satisfy my own curiousity. If I do I'll probably do a new post and put a link in here.
Also, I've actually compressed my photos this time which I don't normally do, though I have posted them large. My blog loads quite slowly and while I'm mostly clueless on things like this I assume it's due to picture size. I'm undecided if I should go back through previous posts and compress them or not. I'll have to think about it.
Thanks for stopping by!
Meeka :)
﻿
Posted by Meeka at 10:47 PM 0 comments

Hello! So the past week has been something of a wash for nails. We had Typhoon Muifa drop by and it decided to stick around for 3 or 4 days. We aren't even supposed to leave our houses when there's a typhoon here according to the military, I guess they don't want any of their employees to decide to play in the storm and get hurt. Either way, with 90mph winds and driving rain for 3 days straight you don't much want to go outside anyways. Thankfully we only lost power for about 8 hours, I can deal with that.
On to the polish! Zoya Ki is one that was on my wish list for a long time before I finally bought it. I have Nubar Peacock Feathers which is gorgeous but quite dark so it can be hard to see the duochrome effect of it. I had heard Ki was similar but lighter so I had to have it. I picked it up in the Earth Day promo and only just now wore it.
Ki is a gorgeous purple and green duochrome that looks like an oil slick on the nails. I am not disappointed with this polish at all. I'm wearing 3 coats in these pictures, you can almost get away with 2 if you don't require complete opaqueness. I doubt anyone but you would notice :) The bubbling you see in these pics is my fault not the polish. 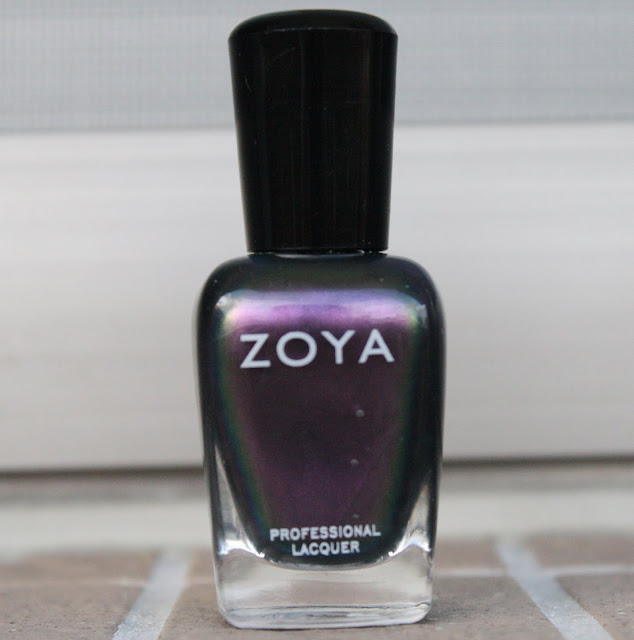 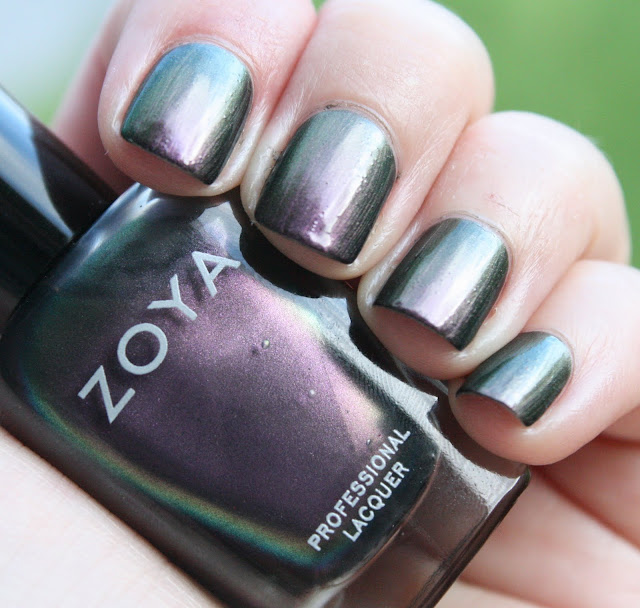 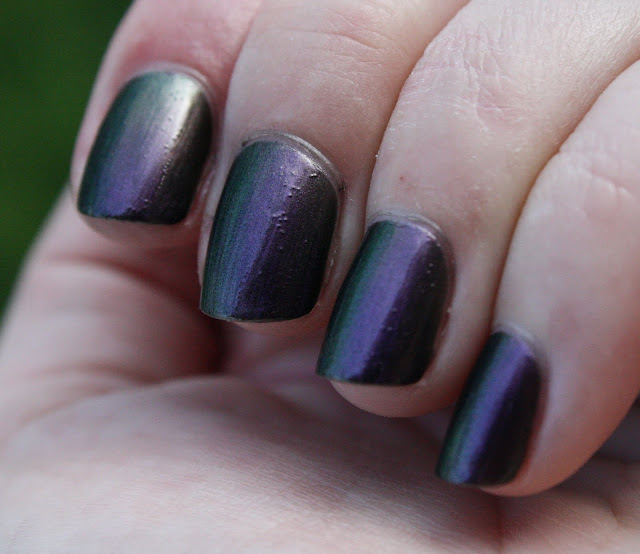 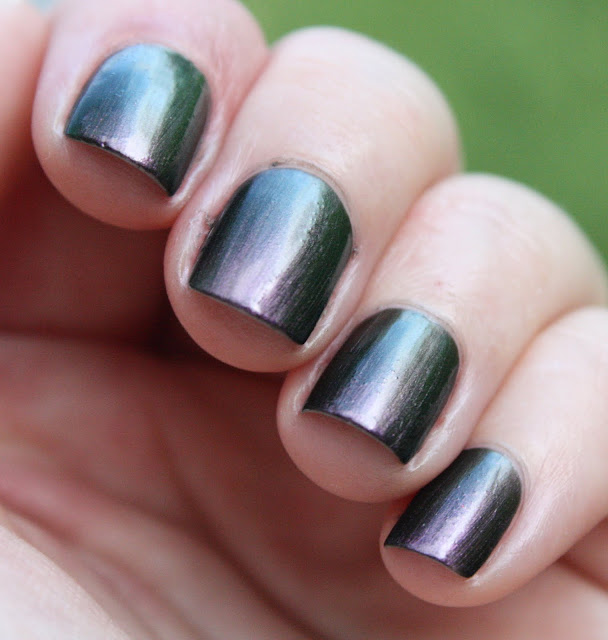 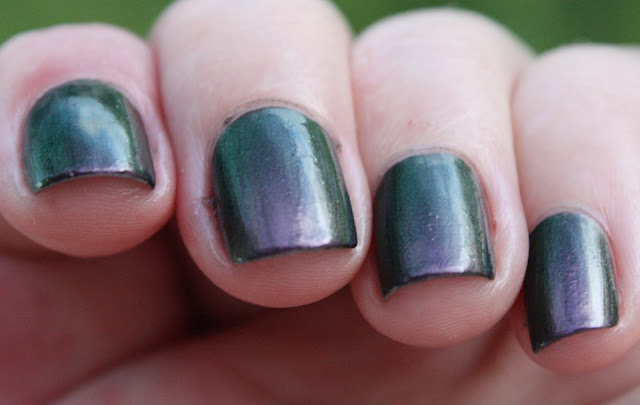 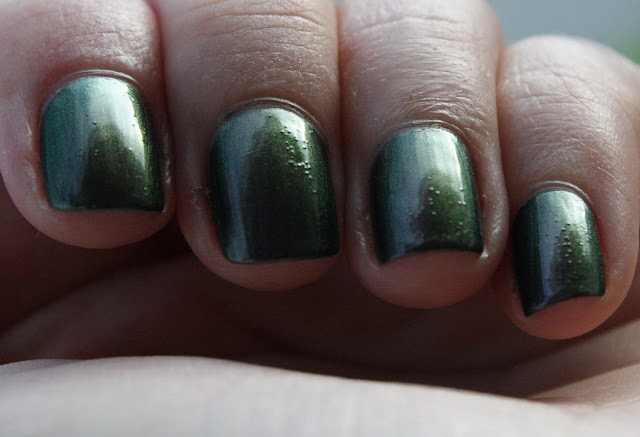 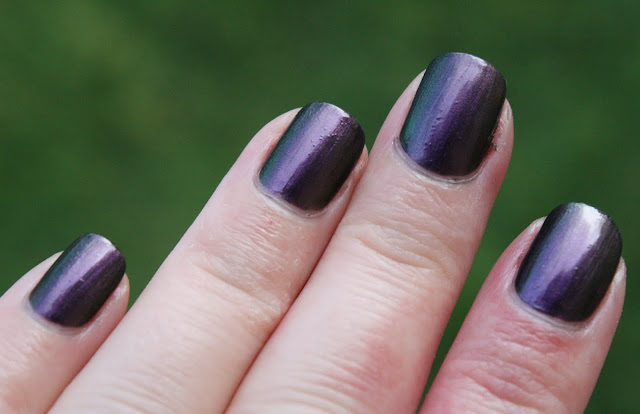 Hello! It's been a while since I've posted a franken, I haven't had any balls for a while so I haven't been able to make any. My husband very sweetly ordered some for me last week so I should have some soon, yay! I made this one a while back, the same time as I made my Rainforest Mist franken but I haven't actually worn it till now.
This franken is a dusty purple (gravender if you will :P), the holo isn't overly strong in it but it's definitely there. I don't remember at all what I used for this sadly. In low light it looks like a purpleish grey, in brighter light it looks definitely purple. One thing I like about holos is that almost grainy look they have, they may not be in your face sparkle but they always have some visual interest that a plain creme doesn't to me.
I took two sets of pictures again, one with the good camera and one with the regular camera. All of these should be regular on the left, SLR on the right. Also, you should be able to enlarge them all if you want to take a closer look :) 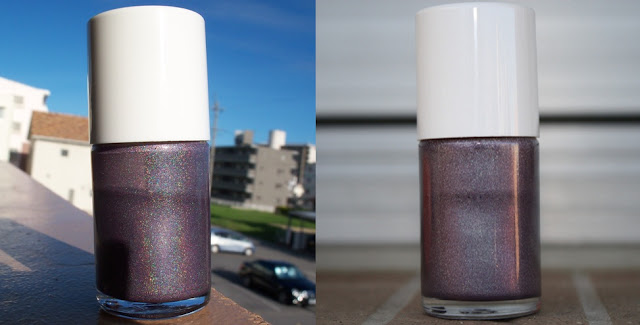 If anyone has suggestions for names I'd love to hear them! The things that come to mind for me are dusk or twilight, that greying purple sky when the sun is setting. Right now it's making me think of this:
Thanks for stopping by!
Meeka :)
Posted by Meeka at 3:09 AM 2 comments

Meeka
Painting my life one nail at a time.